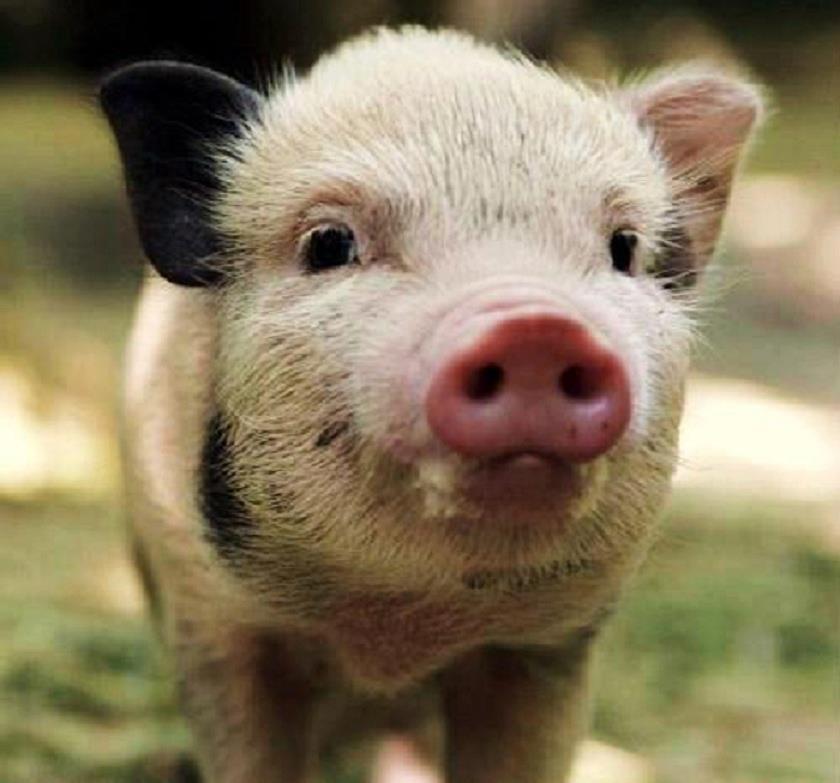 A Kinder World - "When one of our pigs dies, all the members of his or her herd will come by one by one to say their goodbye's. They quietly and respectfully push on the dead pig with their snouts while uttering very quiet grunts. And, yes, pigs do cry. I have witnessed this phenomenon for over 20 years.

"For some reason it seems more prevalent with the big farm pigs...and I'm not sure why. Often, when one of their group is dying, the other members of the group will set up a vigil with one or two pigs in rotation constantly laying with the dying pig while the others stand nearby in almost a respectful and silent wait. Once the pig has died, the group leader...most often one of the large, dominant females...will stand guard over the dead pig while the rest of the herd pays their individual respects. Guarding to the point that she will not let me approach the dead pig to remove the body until the grieving is done.

"It is also not unusual for those pigs who were particularly close to the dead pig to go off and mourn for a few days...even to the point that they refuse to eat. The longer the group of pigs has been together and the closer the group is to each other, the more pronounced the rituals seem to be. They are truly amazing animals and are not given nearly enough credit for the complexity of their emotions or their feelings."

I'm ashamed that I ate pig for as long as I did but now all that has changed. I owe them and all other animals in the meat trade to become actively involved in opening others eyes to what's going on behind closed doors. I'm working on it!

This was a touching tale of how pigs behave given the freedom. Thanks for sharing :-)

I heard pigs are really smart, smarter than dogs.

I read an article saying pig are smarter than 1 year old children.

Pigs are so cute, and such brilliant creatures xoxo So sad society tries to paint them in such a negative light, as if to make you "guilt free" when you eat them. Cows also endure this hate propaganda, despite being such kind, intelligent animals.

The Pig Preserve is a 100-acre sanctuary located in the Cumberland Mountains of TN.  We rescue and care for pigs of all sizes and breeds...from potbellied pigs to feral pigs to huge farm pigs.  Here the pigs are afforded the opportunity to live, graze, roam, forage and form their own social groups much as they would do naturally.  Our goal is to allow rescued pigs to return to as natural a lifestyle as we are able, while providing them with love, security, safety and veterinary care.

We currently have around 100 pigs at the sanctuary...ranging from tiny potbellied pigs to 1200 pound farm pigs.  All live together in barns scattered around the property and spend their days roaming the woods, pastures and ponds on the Preserve.

The sanctuary is a 501(c)(3) non-profit organization and exists solely on the contributions and donations from our supporters. We have been rescuing and caring for pigs for over 25 years...starting with an acre and a half of land in VA many years ago.  We moved to a 17 acre sanctuary a few years later and, eventually, bought the 100-acres that the sanctuary now sits on.  It has long been our belief that rescued pigs should be afforded the ability to roam and live a natural lifestyle.  In the wild pigs are small, nomadic bands and our goal has been to replicate these conditions to the extent possible.  We have been rewarded with a herd of extremely active, healthy and happy animals.

Our pigs come from a variety of sources:  abandoned pets, abused animals, former research pigs, former 4 H pigs and pigs who have miraculously escaped or been rescued from factory farms.  Our pigs range in age from just a few months old to well over 20 years of age.

To protect the privacy and health of the pigs, the sanctuary is not open to the public; however, we do host visitors on a case-by-case basis.

What wonderful work you do,over the years theres been several Pigs here too,all were rescued from slaughter, "2 Chistabelle and Heathecliffe"lived with me in the bungalow ,whenever i had to trim their hooves i had to wait untill they were snoring   then gently wake them up to treat them "sleepy piggys" always respond better late at night to any treatment!!they are a huge miss in my life...as the saying goes"Dogs look up to you,Cats look down upon you ,and Pigs look you directly in the eye"

Hey, that’s only an hour’s drive from me. I should visit and volunteer.

John...we are "officially" not open to the public but you are welcome to visit the sanctuary.  Just make sure  you call and make arrangements beforehand just to make sure I'm not out hauling feed or taking an animal to the vets.  If you come...be sure and wear old clothes and boots of some sort. With many friendly pigs who have dirty snouts, you will probably find yourself a bit dirty when you leave.

Two days ago I had to put down one of the sanctuary's favorite pigs.  Her name was Momma Fleurri.  Fleurri was a very old pig by any pig standards.  She was around 16 years old...possibly older.  In her former life Fleurri was a breeding sow at a Heritage Museum Farm in NY.  This is a place where a model farm is run like farms were run way back in history and everyone dresses in period costumes, etc...

When it was decided that Fleurri was "used up" for breeding she was to be sold for slaughter.  But some caring people in the community contacted the sanctuary and we agree to take her and let her live out her life here.

When Fleurri arrived here we were amazed.  She was white, nine feet long, stood much higher than my waist (and I am well over 6 feet tall) and weighed in at svelte 1200 pounds or so.

From her first day here she was a slow moving, sweet, gentle natured and loving pig. Having been a mom many times over, Fleurri took every newly arrived young pig as her own and "raised" them her way.  She was a stern but loving mom.  She disciplined her adopted children with a grunt and a swing of her giant head.  But a few minutes later I would find her laying in the sunshine with baby pigs climbing all over her huge body while she snoozed contentedly.

As with many elderly unspayed pigs, Fleurri developed a rapidly progressing uterine tumor.  At her age and size surgery was out of the question...and there was a better than even chance that the tumor was malignant and had already spread to other organs.

I opted to put her down quietly, peacefully and with dignity in the barn she had come to know and love so well and surrounded by the pigs of her social group...many of whom she had raised.

The vet arrived just before dark and Fleurri died peacefully and painlessly while I held her massive head in my lap.  I left her body in the barn overnight so that her herd mates could say their goodbyes.  When I checked on the barn later that evening before bed time, I found Rosie...one of the pigs Fleurri had raised from a piglet...lying on top of Fleurri's body crying.  It was a very touching moment and one that had to be seen to be believed.  Rosie is now almost 1000 pounds herself.

As I began to remove her body the next morning for burial, every pig in the barn came buy and nudged Fleurri with their noses, talked to her in quiet grunts and then either went into a stall or out of the barn while her body was removed.  At feeding time that same evening, the pigs in Fleurri's group were as quiet and somber as I have ever seen a group of pigs.  Usually at feeding time they are rowdy, noisy and boisterous as you would imagine a group of hungry pigs would be.

These animals never cease to amaze me with the depths of their emotions and the strength of the bonds they forge with one another.

Very touching story,its only 2 years since i buried "Ebony"a huge Large Black,that developed terrible arthritus at the age of 7 it broke my heart as they all do,it took me 12 hours of digging  which at the time helped me to grieve.

very touching, and believable, i know animals grief too. Good heatlth and happiness to all of you