Be vegetarian and save the world.

Do you believe in "global warming?"

Have you ever heard that by being vegetarian, we help to cut the emission gas?

Is a vegetarian really save the world?

I might have heard that being vegetarian helps cut down emissions.  I am not sure what I think about global warming.  This issue is heavily debated.  Mostly I believe the global warming scare was created by world governments in order to enforce the carbon taxes which inevitably help private companies and governments profit off of citizens.

I believe that at least being vegetarian improves the environment by needing far less land than cattle grazing.

The evidence for global warming is too strong to ignore, I definitely believe by going veggie people are helping to save the world :)! It could also prevent polar bears from going extinct :(! Those photos where they are drowning because of all the ice melting are just heart breaking.

How to deal with skeptics:

The evidence for global warming is too strong to ignore, I definitely believe by going veggie people are helping to save the world :)!

I see two different issues here and I am not 100% sure there is a link.  Going veggie might save the world but I haven't heard that it was linked to decreasing global warming.  I have heard that a more accurate phrase would be climate change because the climate sometimes gets warm and sometimes cold.  It is not necessary that human caused carbon emissions from fuel consumption are definitely causing that climate change.  It may be for instance the sun.

Satellite analysis of climate change has only been going on for 33 years so it is not enough time to draw a conclusion about what can be possibly causing the melting of ice caps.  The pics of drawing bears could be rather heart wrenching and used to play with emotions of people to manipulate them into believing that the governments are telling the truth.

Here is one opinion at least:

In December 2011, Climate Depot released the A-Z Climate Reality Check report, noting: “The scientific reality is that on virtually every claim — from A-Z — the claims of the promoters of man-made climate fears are failing.” Since that report was issued and presented to the UN climate conference in Durban South Africa, the claims of man-made climate promoters have continued to fail on every issue from sea levels to polar bears to global temperatures to Mt. Kilimanjaro to extreme weather claims to hurricanes to tornadoes to Antarctic ice. The failure has been so complete that global warming activists and many in the media are now forced to point to any bad weather event as somehow “proof” of man-made global warming.

Here also a paper that outlines some points with some arguments against the idea of carbon emissions causing global warming.  And here is the introductory blurb with a with a link to a PDF all about it.

It is widely alleged that the science of global warming is “settled”. This implies that all the major scientific aspects of climate change are well understood and uncontroversial, and that scientists are now just mopping up unimportant details. The allegation is profoundly untrue: for example the US alone is said to be spending more than $4 billion annually on climate research, which is a lot to pay for detailing; and great uncertainty and argument surround many of the principles of climate change, and especially the magnitude of any human causation for warming. Worse still, not only is the science not “settled”, but its discussion in the public domain is contaminated by many fallacies, which leads directly to the great public confusion that is observed.

This paper explains the eight most common fallacies that underpin public discussion of the hypothesis that dangerous global warming is caused by human greenhouse gas emissions.

This kind of phrasing: How to deal with skeptics: , Just kinda demeans others with another opinion.  There are two sides to the argument so unless we look at both sides and use the information provided by experts in the field, then following blindly what the governments make us believe is just a bit foolish I think.

I wish I had more time and energy to debunk the global warming theory, but I mainly rely on good arguments that I have heard from experts.  The last I heard was that the amount of ice depleting vs the amount that is replenished is nominal like a glass of water being taken from a swimming pool.

I don't know, it's hard to say. While not eating meat means you reduce a large portion of damage caused by the agricultural systems, it still doesn't make the damage from industry, developed countries civil pollution, or industry any less.

So while it does help a little by reducing things like methane emissions and water use, but I don't know if being vegetarian and stopping global warming (or other environmental problems) are mutual, as many of the environmental problems caused by meat production are also caused by the production, transportation, and storage of vegetable based foods. And that's not including other industrial pollutions and civil waste.

ya, well that has been my point for a long time, but not a popular one.  well its not only that all the industry involved in transport of veggies and grains can cause more emissions but also it can potentially harm life forms such as insects and other animals.

I am still not convinced that being vegetarian 100% guarantees killing less life on the planet in all cases, because it depends on how factories are raising their meat which at the moment, it does make vegetarianism a better option.  but things were not always like that on the earth such as when animals were living off the land free and hunted by man.  and in some places of the world, it is like this still.

for me veggism has more to do with the current circumstance of environmental harm and also economic, health factors.

As  one part mithane said to 6 parts,i feel its human greed that has caused such destruction,particularly on the Europeon side,and unless we can learn to give up our obsession with material gain ,we will soon become extinct ourselves!Being much moe comfortable with none human politics,i still feel that as humans attempting to dominate Nature will inevitably lead to our own downfall

Anthropogenic alterations to the planet such as massive increases in greenhouse gases (global warming), the drying up and polluting of major freshwater systems, oceanic acidification, mass deforestation and destruction of soil, and the mass extinction we've been causing for around 60,000 years are indisputable scientific facts.

While I agree that there are certainly people who take anything as an opportunity to make money, the fact that the issue of climate change almost never came up in the presidential debate is very telling, especially since we've just seen the beginning of a new and increasingly violent trend of hurricanes that is the direct result of global warming (this has been predicted long ago by climate scientists, such as Knutson and Tuleya 2004).

It's indisputable, human activities are causing all the above changes to the world. There are natural long-term events like you described, but the current warming is happening about 10,000 years too early and doesn't account for all the other, obviously anthropogenic changes.

There's a film called Home that's gives you a pretty nice view of what's going on with regard to over-development and over-exploitation. It also has some beautiful images. 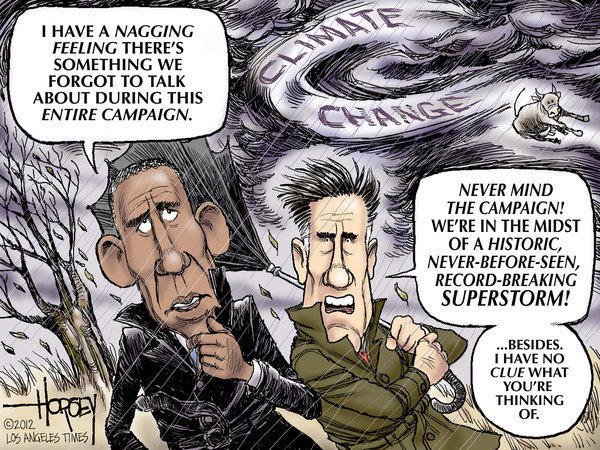 Wonderful post. More people need to be educated about this matter, I feel like shoving it aside and not paying attention to the overwhelming evidence, and the mass consensus, is not doing anyone any favors.. certainly polar bears weren't going extinct in the past because oops, they wouldn't be here dying now lol.

Anthropogenic alterations to the planet such as massive increases in greenhouse gases (global warming), the drying up and polluting of major freshwater systems, oceanic acidification, mass deforestation and destruction of soil, and the mass extinction we've been causing for around 60,000 years are indisputable scientific facts.

I am not sure why you would lump in indisputable facts with ones that are being currently disputed by experts?  The verdict on what causes green house gases to increase and enable global warming is not in yet as far as I can see.

So do you think laws, which attempt to control the actions of others, inherently make the world a worst place?

And yes, I agree that no one here is (likely) a climatologist or even has enough experience to understand much of the data that people have acquired. It's also true that who you lean toward is who you follow. The only problem is that people who lean towards the scientific community are in favor of climate change, while those who lean towards a free-market ideology support denying it. It's literally a matter of do you believe the IPCC (an intergovernmental body set up at the request of nations in the UN because climate change was obvious a looong time ago and who's sole purpose is to provide comprehensive scientific assessments on climate change) or the Marshall Institute (an American conservative think-tank established to support American nuclear war technology and has since used the exact same tactics to deny the negative effects of tobacco, DDT, acid rain, and climate change, among other things); in other words, learn about these institutions and you'll see it's pretty obvious what's going on.

Chech out this book, it's a great read. These lectures are on the same topic.

I guess that it really depends on who is part of VF.  All are welcome, so I don't see why we definitely don't have one.  We might have one in the future if there isn't one now.  We even have military on VF which I didn't guess would happen.  I am sure the FBI might be here too and CIA.  Why wouldn't there be?  Vegetarianism is pretty mainstream nowadays.  It is no more a diet for nerds, fags and cult religious freaks.

I never have heard of those institutions before.  I will definitely read up on it.  The only distinction I have ever made between people who believe or protest global warming are between people who believe everything the government says and people who don't.  I am one of the latter types and I am not really involved in those ideologies you mention.  I think your analysis might be limited since I and many others have nothing to do with what you are talking about. I am sure there might be some basis for what you are saying though.