Blundering Hunter Leaves Deer Wandering With An Arrow Through Its Head

This horrifying picture was taken of a deer that wandered into a New Jersey garden.

his deer with an arrow shot cleanly through its head was spotted and photographed by resident Susan Darrah.

She says she was shocked to see the deer at her home in Boonton with a dart wedged through its muzzle. 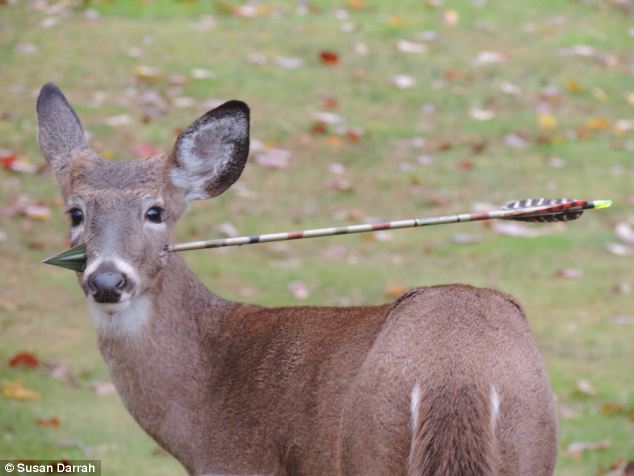 'Shocked': Susan Darrah said she took this photo of a deer impaled by an arrow in her New Jersey back yard

'Want to know what sucks? THIS!' She posted on her Facebook page, 'Tried to capture him to no avail... he can eat, run and there's no blood, less chance of infection. I just feel so bad for him.'

The animal wasn't bleeding and didn't appear to be frightened, she claimed.

Ms Darrah immediately contacted animal control and they turned up the same day but were unable to catch the animal. She said the deer was a regular visitor to her back garden.

Deer are attracted to her large property thanks to a big pear tree and its location next to the Split Rock Reservoir.

'I know a lot of hunters and I know that was nothing done intentionally,' Ms Darrah told her local paper. 'I'm sure if any hunter saw him, they would have been kind of enough to put him down.' 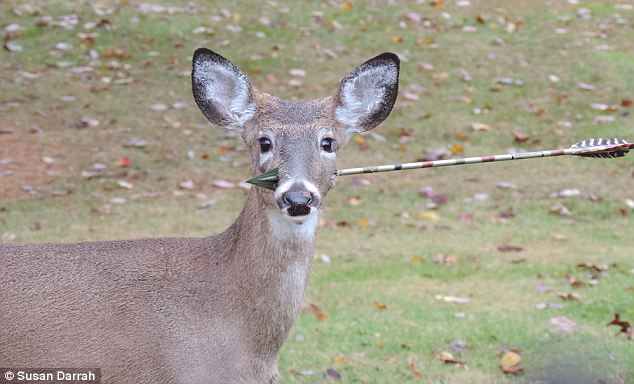 Bow hunting for deer is legal in all 50 states, but ethical hunters aim for the body

Ms Darrah spoke to a Fish and Wildlife representative and followed their advice to put out a supply of corn for the deer, which appeared to be travelling in a herd with four others.

The state Division of Fish and Wildlife sent out a crew to the area looking for the deer, and spokesman Bob Considine said the department would tranquilize the animal in the hopes of removing the arrow.

Ms Darrah said they told her to call them as soon as the deer reappeared in her back garden and they would try to catch it.

Her efforts to help the animal were applauded by her friends on Facebook after she posted the image, taken from her back fence, and many of them expressed their sadness at deer's plight.

She posted on her Facebook page: 'I've been on "deer watch" since just before 5am. I have NJ Fish and Wildlife alerted.

'I am also sure this was not done intentionally. Any hunters I know would have looked for this deer knowing they missed a clean shot. In addition to that, all the hunters I know, hunt for food.' 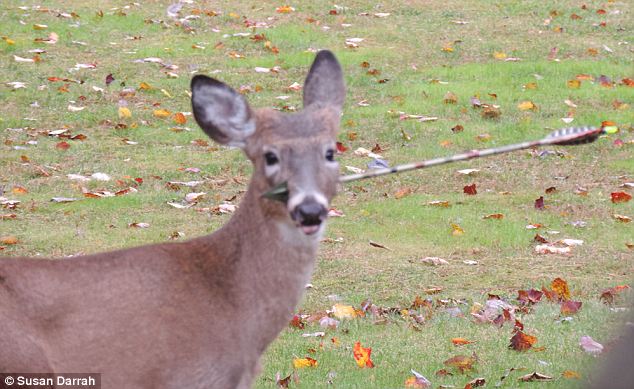 There is no such thing as ethical hunting.

Did they take out the arrow ? Did the deer survive ? How sad.

Humanity Is The Cancer Of The Earth!

Thank God.. They saved the deer. Click on this link for more details

cool thanks for the link!

Someone should do that to that terrible hunter!

Lol, I'm sure if a hunter seen him, he would be kind enough to put him down. WTF? How is it kind to murder? Hunters are POS' and need to go bye bye. The poor "lesser" animals have suffered enough. I wish someone would go around killing the loved ones of hunters so they would know how some of us feel each time they kill an animal. I sure hope the human virus blows up the planet soon so the innocent can all be put out of their misery.

I can only agree with you, David! The earth doesn´t need men, all the plants and animals would be better off without us!!!

"Kind enough to put him down"? How about kind enough to chase him down... Maybe tranquilize him to get the damn arrow out! now that would be kind, you arrogant, huntin' asses. Do you have the ability to assess the value of any living thing beyond what it worth to you?

This shit happens every second everywhere, even in their mouths and stomachs. Shame on you defending and excusing your tendency to inflict sufferings.

Human are eating their own shit in the hell created by their own hands until they become so depopulated and degraded that they can't harm the planet and other lives anymore. Wars and man-made disasters are caused by your own cruelty, evasiveness, arrogance and foolishness.

But please don't extinct yourselves too quickly until you've tasted all the craps you shitted on yourselves for many lives. See it or not you fools it is just the Rule how the Existence manifests itself. Excusing yourselves by your beastified intellectual to disbelief can't stop its existence. One obvious sign is that you long for Heaven but Hell is already at your feet right now.