Dogs are slaughtered and skinned in the streets of Qianxi township during the ancient festival, usually held in October. 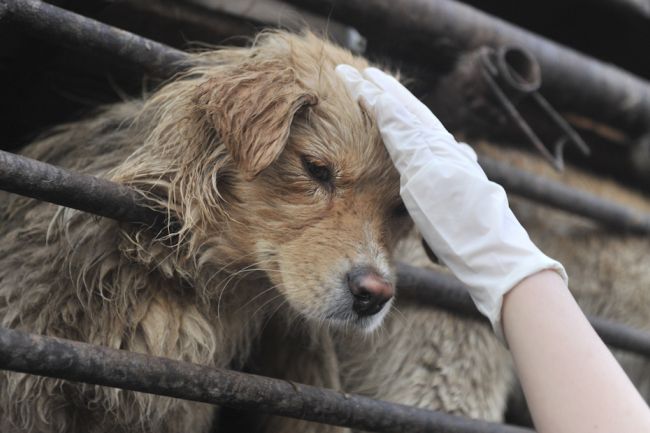 A Chinese animal lover consoles a dog after a convoy of trucks carrying some 500 dogs to be sold as meat,
were stopped along a highway in Beijing on early April 17, 2011, and the dogs were later rescued to the
China Animal Protection Association. (STR/AFP/Getty Images)

China has banned a dog-eating festival that dates back more than 600 years after a Chinese internet uproar over the way dogs are slaughtered, the official Xinhua news agency reports.

Dogs are butchered in the streets of Qianxi township in coastal Zhejiang province to prove the meat is fresh during the ancient festival, which is usually held in October.

The festival marks a local military victory during the Ming dynasty, in which dogs in Qianxi were killed so they would not bark and alert the enemy, state-run Xinhua says.

After the victory, dog meat was served at a celebratory feast, and since then local people have eaten dog meat at temple fairs held during traditional Chinese holidays, Agence France-Presse reported.

"The ancient fair was replaced by a modern commodity fair in the 1980s, but dog eating has been kept as a tradition," Xinhua says.

More from GlobalPost: Can eating dogs be done humanely?

"However, vendors began to butcher dogs in public a few years ago to show their dog meat is fresh and safe, as a way to ease buyers' worry that the meat may be refrigerator-preserved or even contaminated."

Thousands of Chinese internet users criticized the dog-eating festival on social networking sites, and called for the local Qianxi government to intervene.

"The government's quick response should be encouraged. I hope eating dogs will not be a custom there anymore. It's not a carnival, but a massacre," wrote an internet user named "Junchangzai" on a Chinese micro-blogging website, in a post that was "re-tweeted" 100,000 times, Xinhua says.

While dog ownership was banned in China during the Cultural Revolution as a bourgeois habit, it has become increasingly popular with China's growing middle class and one-child families, Reuters says.

I have 4 puppies at home and they are my life. I cherish them and would do anything to protect them. If someone attempted to harm them/ kill them... they would not leave my property alive. I am sending you some pictures of three of my puppies: TBONE, HARMONY and their daughter ROSALIE. Could not find a picture of LITTLE GIRL, who is the mother of TBONE and HARMONY.

Yes!  For decades, I have not been able to understand the lack of involvement by the media regarding this subject whether it be about the science i.e. vivisection, factory farming, etc.  Lately, animal cruelty cases are getting more press but lawmakers are still dragging their butts to increase the charge from a misdemeanor to a felony.  Our culture in this country is very resistant to appealing to people's conscience regarding eating meat (animals).  The politics involved via the cattle, poultry and pork industry holds publishing companies at bay on this issue.  I HATE IT!  No matter how much science is explained and revealed to the public, people are too selfish in general to be willing to consider altering their lifestyle/diet.  Restaurants rarely offer vegetarian choices except for salads and many of those are made with meat ingredients.  WHY HASN'T THERE BEEN ANY ENTREPENEURES WILLING TO INVEST IN VEGETARIAN RESTAURANTS!!!!!

@ Joan Settina
I understand the frustration. Everyone's rights are being stomped down these days in the US and that includes the right to report animal cruelty in factory farms, alaughterhouses, etc.
Why not more veg restaurants? Fear of failure, mostly. Most larger cities have some. Some people do invest in this and they do exist. But we could certainly wish for more choices. And in some places, well-run veg eateries have drawn omnivores too.
In Tulsa, Oklahoma, where I work, we did have a wonderful vegan Vietnamese place that had no-egg eggrolls that a well-traveled friend (omnivore) said were the best "eggrolls" she had ever tasted. Local vegetarians often took non-veg friends there to show them how good vegan could be. But after four years (I think), it folded from insufficient business.
Now I hear there's a new veg restaurant in town, which I do intend to check out.
My forays into restaurants include certain Asian ones who are frank about what they put in things (many Asian restaurant specialties that appear veg actually use a meat-broth base), and certain Indian ones. My current fave is an Indian restaurant that is very vegan-friendly. Their waiters know exactly what is in each dish and they will even make custom vegan dishes for you, gladly.
I had a nice discussion with the owner about the Jain faith (whose application of "ahimsa" includes being vegan) and he referred me to a Jain Temple in the city that welcomes visitors. That should be interesting.

@Craig re the stressed-animal-disease connection:

Can you put me onto some scientific studies supporting this? I believe it, it makes sense, but in sharing it with others it is useful, even critical, to back it up with the specific research.
So far I've found references to the adrenalin-vascular disease - impotence connection, including a lab test to rats fed meat from stressed dogs which resulted in many ill effects including impotence. But no sources!
I was able to find lots of work via medical reference sites tying vascular disease to impotence, but the connection to fear-induced adrenalin has been elusive.
If you have some links I would love to share them profusely!

Why is this post on????? its from 2011 and since then the festival has continued even more so.....please check your sources before you get peoples hopes up :( so gutted for the dogs and all the people i have told this too x

Kim - source?
I just looked through several pages of search results and found only references to it being banned. I was going to share the above article but an uncertain now.

This is not true x

What a great feeling to hear this news.God is strong and mighty and he listens to the those who pray for these animals around the world everyday.There is no more room for injustice and brutality and torture.It will be stopped.

Fucking savages...It's times like these that I'm ashamed of being human.

Great step in the right direction. I heard about this "festival" when I was really young and it messed me up. Getting sick now remembering the story I was told from a relative, who'd visited China during this festival time.   I just could not believe people did that.  So glad there is a ban in place! Lets hope it lasts forever.

eventually the meat eating trend will fizzle out because the will go through tremendous suffering as how they do to animals and will be forced to become vegetarians..