Should it be a legal requirement to say if something is "suitable for vegetarians"?

I'm finding that sometimes it's not enough to look at the ingrediants listed on a product. Not everyone can remember which E-numbers are V friendly, and things like whey powder and beta-carotenes aren't always the vegetarian versions.

I read that some companies refuse to mark a product as "suitable for vegetarians" because they say the customer can just read the ingrediants, but obviously it's not as easy as that as some ingrediants are ambigious.

These companies are surely loosing money - if vegetarians knew what was safe then we'd buy more.

Or are they simply refusing because they don't want to admit that their products are non-V?

We all have a right to know just what we are eating/drinking!

I think so. Products such as Amy's already do- I've read a few products which do this. The reasons companies don't is because they like to hide much of their ingredient's and that's NOT their right. The food companies have so much power, they can straight up lie to you at times which is ridiculous. What I love the most is how ambiguous things like "natural flavorings" are- even if you read the ingredients label, and call about their "natural flavorings" companies have been SHOWN to lie or to be indirect with their answers, which is why products like castoreum (beaver butt) ends up in so many products. People have a right to know what they're putting in their mouths, I think it's assinine to suggest otherwise.

How is that devil's advocate? I think it's fairly obvious that all companies should label what goes into their products, period. You have a right to know what you're putting inside of your body. The only companies afraid to do this are the ones selling disgusting products people wouldn't eat given the chance.

And when it comes to knowing what's in your food, that is VERY justified "self importance." I think it's a bit of a self interested thing to say that people don't have this right, and to try and attain information they deserve is considered selfish or self serving. Well yes... people cannot monitor their wellbeing if they are being lied to about what is going inside of their food.

Also, companies change and they also change their ingredients, quite commonly. For example.. makeup company Urban Decay used to be cruelty free. If someone purchased this product simply because it was "once" vegan that doesn't help them when it changes. Burger King USED to have a vegetarian burger, doesn't do people many favors when their "veggie burger" stopped being vegetarian, and no one was informed of this.

Wanting a personalized label is laziness on the part of the company- it's their duty- and I think it's more self righteous than anything to tell people, "Well you should always just know better" despite there are companies which again LIE about what goes into their products.

By your own argument, no product should be labeled as "kosher." Screw those stupid people who want to buy "kosher" food wherever they go without having researched every single kosher brand to make sure that they are sticking with their lifestyle. They are so dang selfish, not knowing every kosher product available... ridiculous argument.

"So called"? Tell me, if you create a product which people ingest, and when food can make people sick, how is it not your "duty" to provide what you are placing in there? So if someone decides silicone or any other harmful product is nommy, they don't have a "duty" to report it- well you might be happy being kept ignorant, but I don't. Companies have legal responsibilities, whether you like that or not, and it's not obscure at all... put something in your product, label it. End of story. Not that difficult.

And why shouldn't it be convenient for the consumer? I suppose I am missing your point as to how it benefits companies to hide this information, except to get people to eat products which they are ashamed of, such as castoreum- which they no longer have the duty to place on labels. Companies do NOT list what they use, because of things such as "natural flavorings" which was divined to encompass things from blood and puss to again, beaver anal glands. That's not honesty and that's not labeling your products. Also there's a law stating that if they import flavorings, they do not have to list what those products are. Which I find to be ridiculous. This is why so many countries are having a health crisis- people not being aware of what is in their food. So I put it to this point- companies have an obligation under the current health crisis to report what they are putting in their foods, to help bring obesity and diabetes and everything else under control. Information relevant to one's health BEST be convenient, and I don't find that to be demanding or selfish at all, but common sense.

And again... even if a vegan say called a company about their "natural flavorings" they could be lied to and never know the truth. Several investigative studies have shown this, again, especially around things such as castoreum. You cannot actually be 100% sure what you eat is vegan if you don't eat 100% organic. Though the whole trusting a corrupt company and their moronic employees thing is cute.

I think it's a very greedy thing to say the companies should not be concerned with how their products harm lives- and this has enabled them to put damaging even deadly things inside of their foods. I'd rather not enable the corporations to continue to degrade the health of countries such as my own.

Consumers have never stopped caring what they ingest. Companies spend millions and millions of dollars to confuse customers and to hide what they place inside their food, and then we have people like you coming along telling people that despite these industries and the millions of dollars they are throwing around to protect their unethical practices, people are supposed to remain omnipotent about what goes into their food. I would agree with your points- if we lived in a magical realm where companies did not run the country, the FDA, and spent millions of dollars to confuse voters (see California voting against GMO labeling). It does not help we put substances inside of food (and other products) which are addicting- we spread misinformation- and then accuse people for not "knowing better." I think the apathy companies and the country has in general for people who are victimized by these practices is disgusting. There are people who believe there are "fast food diets" which are healthy- because of misinformation- and with the level of quakery out  there confusing people, you want them to believe as you believe automatically, and to be aware of things they are brainwashed since birth to disregard. People aren't apathetic towards their health, they are disempowered. And if you truly felt that way, you should want to empower these people to take their health into their own hands. You accuse people of not caring then say companies (which are already protected to a gross extent) shouldn't even bare the responsibility of making their ingredients easy to come by. I think it's ignorance to state people are not victims, when so much money is spent JUST for that purpose- and as someone who wants to go into community health, I think that's of vital importance. Knowledge is key- it should not be withheld, and you cannot blame a society for "not knowing better" when you advocate at the same time they be kept in the dark, trusted to decipher through the mult-million dollar bullshit which is intended to KEEP them ignorant.

You seem to have the idea that companies are the victim. You have still yet to explain why companies SHOULD NOT label their items. It does not cost them any extra money- the only companies it would benefit are again the ones putting POISON inside of their foods. If you are going to sell a product, you are liable to what you put inside there. Period, end of story.

And clearly these companies are waging a successful campaign. CVD is the number one killer of people in the USA, and here you are crusading that people should have less access to information about their food. That is the most ridiculous thing I've ever read.

Still- I'm not understanding YOUR sense of entitlement... I have a right to know what I put into my body, and anyone who thinks I don't have that right can screw off? What an ignorant thing to suggest. YES I have a right, YES I am entitled to know what goes into my food. Stupidity to suggest anyone else should have the power to decide whether or not I will be aware what is inside of what I ingest. And I have already mentioned about fifty times the things not mentioned in labeling, you should probably read my responses more thoroughly before replying.

I also think it's rather disgusting someone would cry for the companies which again- invest MILLIONS into poisoning people and keeping people misinformed to purchase their products- rather than the people who are dying on a massive scale from misinformation.

I agree with everything you've just said, Lauren! And I'm going to assume someone was responding to this conversation, but the posts have been deleted?

What started this thought off was my drink of Lilt. I was reading the ingrediants and I wasn't sure, so I googled and found that it had fish gelatin in. Then I found a list of drinks (http://www.veggiewines.co.uk/popularmixers.htm) but it doesn't match what other sites are saying. It shouldn't be this difficult, not to mention confusing, to figure out what you can and can't have.

That big of googling led me to the issue with Nestle/Walls - their products are so ambigious, forever changing. When they were asked why they didn't starte on the packaging which products were suitable for V's, they simply said it wasn't law so they didn't have to.

Then that led me to this (http://www.food.gov.uk/scotland/regsscotland/regsguidscot/vegiguida...) which covered a lot of bases but still left lots of holes, and even got me questioning some of the places I know. For instance "17. Manufacturers, retailers and caterers should be able to demonstrate that foods presented as ‘vegetarian’ or ‘vegan’ have not been contaminated with non-vegetarian or non-vegan foods during storage, preparation, cooking or display." Which is a load of BS because I know there are many restaurants that advertise something as a V option on their menu, but are made in the same area and same oven as meat products.

UK companies like Marks & Spencer and Asda are very good at labelling their own brand foods, even their drinks. Everyone needs to be more like them :)

Oh yeah I guess so! Haha :) Thank you! You state that perfectly- the companies remain as ambiguous as possible. For most of them an informed customer is a lost customer, I've also dealt with this type of frustration! I agree completely.

I read somewhere the UK has some similar labels but I'm not sure.

Wow! That's a very simple system, I love it.

In the US, I think Trader Joe's labeling is one of the best (if not the best!). an awesome labeling system: 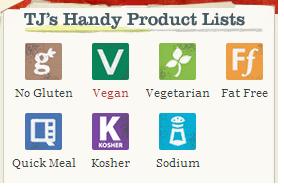 Permalink Reply by Debrah on September 12, 2013 at 9:35am
It certainly would make shopping time a lot easier. Changing from vegi to vegan it takes me forever to do my shopping, most of the time i give up & just go raw or stick to what i have learnt so far.