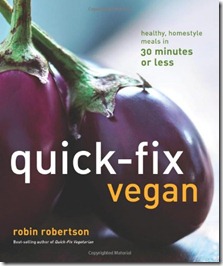 FANTASTIC for the vegan and supportive non-vegan alike!

When my boyfriend went vegetarian last year I wanted to show my support for his healthy lifestyle change so I picked up Robin Robertson's Quick-Fix Vegetarian: Healthy Home-Cooked Meals i.... We're just out of college and we live on a pretty strict budget so we were able to quickly and affordably make the recipes out of that cookbook with very little fuss! Not only that, but as a non-vegetarian I was absolutely loving the meals we were making!

So when he told me he was going vegan, I knew I had to pick this up for him for his birthday! And, much like with Quick-Fix Vegetarian, I'm glad I did!

Robin Robertson never fails to deliver on really scrumptious recipes that are easy to make and affordable. We're usually able to pick up 90% of the ingredients listed within at our local Trader Joe's and only occasionally do we have to go to Whole Foods to find a rare item. This makes making dinner very budget-friendly.

Here are some of the recipes we've tried so far and have adored:

The Jerk Seitan and Vegetable Skillet - Even though I still eat meat, I think seitan is a great and very tasty substitute. And, as a bonus, you don't end up feeling all bloated and heavy after mealtime.

Black Bean Sunburgers - We were always spending a pretty penny buying black bean burgers in bulk at Costco, but this recipe showed us how to save money making our own! They freeze really well so it's great being able to make a bunch at a time and saving them for later. Super tasty!

The Tiramisu Parfaits - These are TO DIE FOR tasty! One of the things my boyfriend has struggled with is how a lot of vegan deserts end up tasting dry or brittle. It was nice to whip these up and they taste just as good (if not better) as the real thing!

Easy Artichoke Puffs - I absolutely adore artichokes, so I could wait to try this one. We made these when we were having (non-vegan) company over and everyone ate them right up. Our guests loved them just as much as we did.

What I like most about this cookbook is the variety. Every course of a meal is covered and Robin Robertson doles out some very practical advice in the introduction of the book about the vegan lifestyle as well as how to properly equip your kitchen and stock your pantry for preparing these meals. I would definitely suggest this book as a first cookbook for anyone thinking of making the transition over to veganism. This book isn't too intimidating for beginners, but still has a great sense of variety for more experienced diners.

I honestly think you can't go wrong with this book, vegan

Following on the success of Quick-Fix Vegetarian, Robin Robertson's Quick-Fix Vegan provides 150 new vegan recipes ranging from starters, snacks, salads, sauces, and sandwiches to stovetop suppers, pastas, soups, and desserts that can all be prepared in 30 minutes or less. Quick-Fix Vegan also features "Make-Ahead Bakes," convenient recipes that are assembled ahead of time (in less than 30 minutes) and then baked before serving.

An introductory chapter provides the reader with basic information on how to maintain a "quick-fix" vegan kitchen including pantry suggestions and kitchen tips, as well as basic recipes for ingredients such as homemade vegetable stock and seitan. Cooks of all skill levels will find that the recipes inside Quick-Fix Vegan are just as delectable and adaptable to the omnivore, as they are essential to the vegan lifestyle.

Visit Vegetarian Stores to get your vegetarian products!