Vegan for Life: Everything You Need to Know to Be Healthy and Fit on a Plant-Based Diet 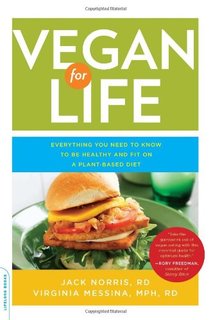 An Excellent, Thorough and Honest Look At Vegan Nutrition.

I have both been a vegan and a grateful fan of the work of Ginny Messina and Jack Norris for many years. Both of them are truly unique among advocates of plant based diets simply because they refrain from hyperbole and don't promise that eating buckets of kale will lead to a life void of the inevitable: old age, sickness and death. That's not to say that veganism has not been a boon to my personal health: it has. But, like everyone else, I will die some day, and vegan eating doesn't change that.

Ginny and Jack keep the arguments about veganism all about the animals, even though they are both dieticians and devoted to human health and nutrition. But they are interested in healthy, happy vegans, too. They have written, at their own time and expense, for many years about the benefits and pitfalls of plant-based eating. They have made recommendations, and changed their positions many times as the science continues to unfold about human nutrition (which should be considered new and emerging). They have done so with kindness, compassion and without a hint of arrogance.

Vegan for Life, a brilliant double-entendre, is an exceptional book. If it's not the very first, it has to be among the very few that paints a reasonably complex picture of vegan eating that goes over every facet--- the good, the bad, the ugly and everything in between. They don't claim that everyone must eat ultra low-fat (quite the opposite); they don't push raw diets (or even recommend them, actually). I actually suspect that they will receive a fair amount of criticism for this book because of its refusal to oversimplify and paint with a broad brush; because they don't promise miracles, and because they admit that there's much we simply don't know about nutrition. But that's precisely what I find refreshing about their work, and this book in particular. Their honesty is precisely why I trust them.

I believe that all humans can become vegan. That's also my wish. However, I believe that it's not a one-size-fits-all way of eating, and we have yet to figure out how every person can become vegan, and stay vegan, successfully --- enjoying abundant health. Vegan for Life gives lots of useful information for people wanting to maintain good health, and for people who feel like they're struggling to get what they need. Vegan for Life shows that it's not impossible for everyone eat, and stay, vegan.

In my opinion, this book renders all other books on vegan nutrition written to date useless (not because other authors necessarily wrote bad books, but because this book incorporates the latest and greatest). And alas, Vegan for Life is written for the long time and brand new vegan alike; all of us are wise to pay attention because --- as the title suggests --- animal advocates want people to become vegan for life. Ginny and Jack are just the people to show us all how.