Check out What Gary Yourofsky has to say about the ever annoying meat eater argument- "plants feel pain too. Share this with any meat eater who throws that at you and I bet you anything he will be speechless :)

It's a long read but SO worth it!

“When meat-eaters run out of excuses to eat dead animals, they usually spew one of two inanities. First, they promulgate respect for the vegan lifestyle, and ask for some respect in return. Of course flesh-eaters respect the vegan way.…

Whether said as jokes, or even said seriously- these are a few 'argument' points that I've encountered in my time being a vegan. To each their own, but these are a few favorites I just had to tackle :)

No, No they would not die. Cows produce milk for one reason and one reason only- for their young. Cows in dairy farm settings are forcibly bred year after year; a constant cycle of…

I became vegetarian because i can't see the cruelty to animals and it broke my heart when i see the videos of PETA or so and they show me what i've supported all the years. But since some months I made a cut. I sais to me I can't do this anymore. I think it's a good thing to not support something like that and i'm proud to say that i'm not a part of the cruelty to animals because it's something that not all can say because they close their eyes to the truth. I'm not anymore someone like this…

This Is the Thanks They Get

After years of birthing babies and pumping out thousands of gallons of milk, do cows used for their milk get a comfy retirement? No. - They get sent to slaughter, where, in the words of one slaughterhouse worker, they "die piece by piece." A longtime slaughterhouse worker said he frequently cut the legs off completely conscious cows who blinked and made noises as their bodies were hacked…

In Memory of Mary: Advocating Against Circus Abuse

Mary was a circus elephant in the 1900's. Her story is one of sadness, and heartbreak. I wanted to share with all of you her story. Learning of Mary has made a huge impact on my life and I think she deserves to be remembered <3

"On September 11, 1916, a hotel worker named Red Eldridge was hired as an assistant elephant trainer by the circus. On the evening of September 12 he was killed by Mary…

I just watched Dr. Melonie Joy's video on carnism. She explains it so well and I wanted to share it with you.

Immunity Health & Wellness, Avoiding the flu, coughs and colds is many times a matter of keeping your immune system boosted with the trifecta of life: Eat!(the right foods) Play! (get some exercise) and Sleep! (six to eight hours a day). Sound simple? It is!

Eat: Boost your immunity with plenty of antioxidants in the form of fruits, veggies and beans. Simple soups, stews and salads are the best way of getting these much needed nutrients into your system, and if you don't have time…

I can't help but go off about this- what the HELL is wrong with these people?????

Yesterday a survey has been conducted in London and other parts of the World and the results which a came with a awesome results that are ..

A "HUG" Is more powerful than the lots multivitamins and Some medicines who are used to 'decrease your blood pressure' and 'lessen your stress' ;)

So continue cuddling with your dear one ., even i tried a lot and serving this new medicine in my circle .. Today i did it for 114 times hahahaha

The true costs of FUR- Visual realities of the fur trade.

Never underestimate the humble cup of tea! Centuries of careful cultivating have give us many remedies to various ailments, and all you need to do is put on the kettle.

Ayurvedic (eye-yer-vay-dic) medicine, (a system of medicine originating in India over 5,000 years ago) uses tea for many ailments, including indigestion, menstrual cramps, liver detox, and many others to promote wellness and healing.

Some of the benefits of drinking wellness teas are better digestion, increased…

Source: Uploaded by user via Mauricio…

I can't remember if I've written a post about this already, I've done a lot of vitamin posts... but here goes.

Vitamin B-12 is a water soluble vitamin. It is needed for various cellular processes including folate metabolism and the maintenance of myelin sheaths. The RDA for this vitamin is about 2.4 mcg for a healthy adult. Deficiency symptoms of this vitamin include pernicious anemia, megaloblastic anemia and nerve damage resulting in paralysis and death. There is no upper…

I am very glad I went vegan a month in and I feel better look better and feel happier and tat I am getting well also glad to help the animal kingdom I feel even more connected to my cats ...Thankful for this website too where you can have support in transistioning :)

I have no idea why, but as of late I've been running into a LOT of religious nut jobs (note: not everyone who has a religion is a nut job by any means, However-these particular people are insane. Nor do you have to be religious to be pro life & vice versa) and I've been getting a ton of flack for my veganism and animal rights campaigning.

The most recent thing to send me over the edge was a comment made by someone (lets call her Nutty Woman) about abortion.  Nutty woman informed…

I've finally been vegan long enough that I now have super cool new powers. That's right, you become psychic. For example: I've gotten my parents to replace spaghetti and meat-balls with a vegan recipe that they really love, and they buy a certain vegan brand for the veggie balls, which is available here. Today my mom made some, and I bring one of them up to my face- pause- then ask her to see the box. Turns out she'd bought the wrong brand, and I came within an inch of eating egg, LOL. Yup,…

I've found Taco Bell to be my absolute favorite place to go to get a good bite to eat, while keeping it meat free, and animal product free. They allow you to substitute your meat for their vegitarian refried beans. So many items on the menu can become vegitarian friendly with this option. What different foods do you order from fast food places that serve meat, or do you avoid it altogether?

Substitute rice, or beans for meat at Taco Bell

Let's spread love and example on the internet

That's right, we're all united together by an ideal: Vegetarianism / Veganism
Let's take our example to the world?
Well, we can do that on Facebook and Instagram, any other suggestions?

If you are on Tumblr, message me! But anyways, I have a new vegan Tumblr I wanted to plug. This person started following me, and I got very worried, because of their name! But they are actually a very witty satire blog, so if it's to your taste they are definitely worth a follow :)…

Here are some pics from my food adventures in New York :) 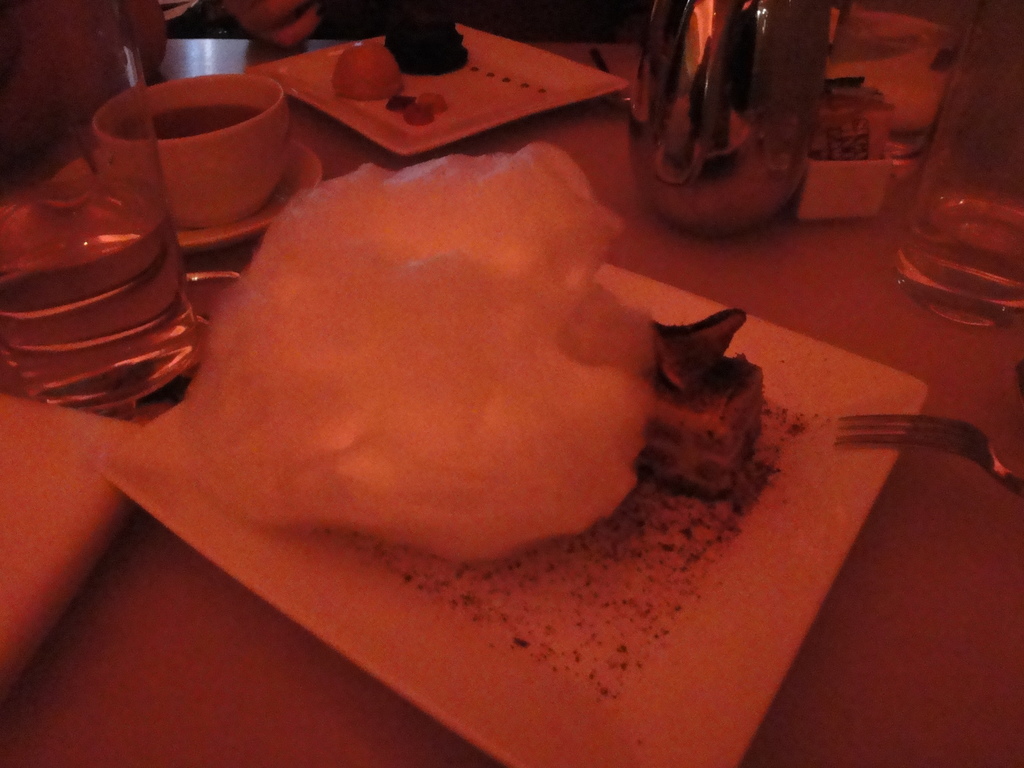 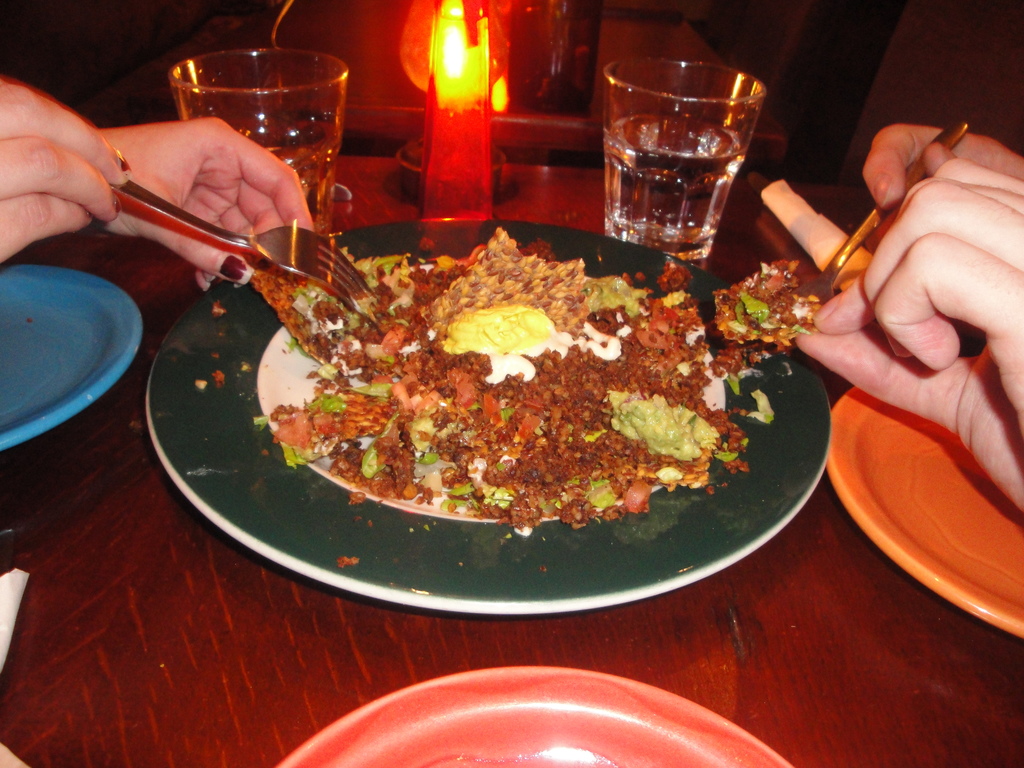