I have distributed my bumper stickers for many years and have noticed that I get a better responce on the average to vegetarianism from women than men..This has caused me to believe that women are on the average more merciful than men.Frequently even women that eat meat feel a sense of guilt connected with it but some men see vegetarianism  as a slight on their manhood and that to be a real man one must eat meat.Of course Mike Tyson is a vegan advocate! If slaughterhouses had glass walls the whole world would be vegetarian. The beef industry spends hundreds of millions of dollars lying to the public about their product.But no amount of false propaganda can sanitize meat.The facts are absolutely clear.Eating meat is bad for human health,catastrophic for the environment and a living nightmare for animals.

I don't feel this is the case. I mean there's definitely a reason behind it, I think it's more so that men are conditioned especially to eat meat more than women. Salads, etc., are sometimes referred to as "chick food". Gender roles may pressure men into consuming higher amounts of meat in order to obtain a "manly" image, though perhaps that is more of a Western thing. 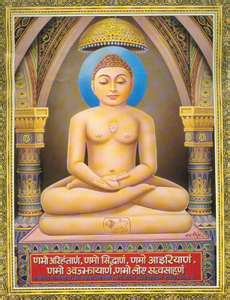 Life is filled with contradictions! In my opinion Mahavira was the greatest proponent of vegetarianism in world history and He was a male.

I am not so sure that women are more merciful per say, but they might be more sensitive about the meat issue as being the ones who carry life in their womb.  Men, although essential to the creation of life, don't have to bear the baby in their body and feel its growth etc.  I would think it make them less sensitive to the idea of life than a woman.  I can imagine a woman being more valiant to save the life of her child than a man due to her own instinct as a child bearer.  I think we have seen this one in both animal and human species.

But I can't see the sensitivity follow to be more merciful, but it must also be just a choice of words.  I tend to think of mercy as related to compassion which is shown in more ways than just abstaining from meat.  Abstaining from meat is just one small part of compassion in my opinion. 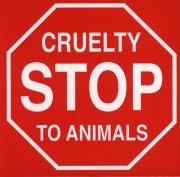 I have distributed oceans of this sticker over the past 20 years.I can never once remember having a female say.'I

LOVE ANIMALS ON MY PLATE!'

etc.but I get that almost daily from males.Everyday I meet tons of both females and males who are attracted to animal rights but I only get this mean spirited  responce from males and if they are with a woman,she restrains her man..

Well men do have higher levels of testosterone, which may make them more aggressive than females, perhaps especially in regards to when they feel defensive. But I don't feel this makes them less compassionate, just more stubborn ;)!

I agree with Jenii :) Also, pointing out that a deity which is compassionate and male I don't think that means that men are supposed to be a certain way or that the ideal will overpower frequent cultural expectations and pressures. Men are as capable of compassion for certain! We just have to break down the walls certain society's have built. As a woman I'm very familiar with gender roles, and also being persecuted for not ascribing to them. 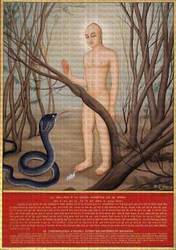 Agsin as I said earlier the greatest proponent of non-violence/vegetarianism was a male,Mahavira,who was so much into non-violence he didn't even wear clothes.Most of my vegetarian quotes are from males also.But I bet there are more females here on Vegetarian Friends then males..

if there were more females on VF, I don't think it has much to do with more female vegetarians in the world. VF is just a crowd of ppl who found a link, that's all. otherwise we can assume that wealthy ppl are more often vegetarian than poor ppl who don't have the internet.  obviously there are a lot of poor ppl that don't eat meat, but can't tell us on VF unless they have internet :)

I still doubt that being vegetarian leads to more compassionate behavior.  I have seen plenty of aggression coming from vegetarians in my life.  I would say however that any compassionate person does contemplate or become vegetarian.  Not all vegetarians contemplate compassion before becoming veggie.  Many people for instance become vegan for reasons of wanting to hate ppl who eat meat.  They call it compassion I guess (toward the animal) but I call it hatred (for humans who are also animals).

I might however argue for the idea that women have a natural capacity for compassion but not exactly that it follows to be a vegetarian.  *BTW, I agree with Jenni's comment.

I don't understand your point about Mahavira, to be honest. Cultural and religious influences are not necessarily exclusive; you're assuming that all men should be moved into compassion because there is a male deity which is about compassion? Rarely are any Gods female, especially in the Western religions, but I don't think that changes how anyone acts. If someone is compassionate, they will be lured to a philosophy of compassion; compassion is built by life experiences and family connections. People are bred into apathy for animals, and for women it is I think a bit easier to become vegetarian/vegan, because of the stigmatism that the meat industry encourages. Men for example are told they need to be muscle-bound, and that they need "protein" to achieve this. In a psychological hierarchy of needs, fitting in with your community and obtaining this image would, on occassion, trump the other.

I'm not a Jain but Mahvira wore no clothes because He was fully renouncing the world and everything implicates us in violence.I'M NOT TAKING SUCH AN ULTRA EXTREME POSITION !!!!!!! I'm trying to get people to not eat meat.