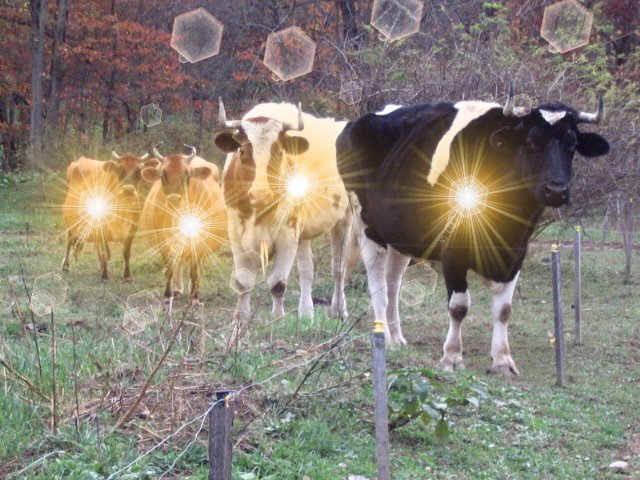 Ofcourse they have souls , far more perfect than our own!

I think the signature of what we call a soul is compassion and love. Animals defend their children, they cry and try to escape when they are in pain. They feel, and they love, and they procreate and ENJOY life (when they're not being abused). We share all the basic needs and joys out of life as our sentient relatives. Human Beings commit some of the most atrocious acts, I think the question should be "Do all humans have souls?"

From a Hindu point of view we are not the body but rather we are the eternal soul that animates the body.We have been around the Wheel Of Birth And Death countless times driven by our karma.Karma and astrology fit together like hands in a glove because by our past  karma we are born at a certain time and place.BUT we always have free will.There is both free will and pre-destiny happening simultaneously.By my good karma I came to this cool site where everyone is a vegetarian but by

my free will I joined it.

this concept of soul is tricky because it is not always clear what is meant by soul. some translate it as "mind" and others translate it as "spirit." the concept in hinduism is that our spirit or "atman" reincarnates in different bodies whereas the buddhists say that we take our mind or mental continuum takes rebirth in new bodies. I am not sure what the Christians thought because at least in the Bible translations, it mentions "soul" but did it mean "atman" or "mind" ? I went once to a Moorish Science Temple meeting once and when they read their Bible, the word soul meant "mind." It kinda blew my world when I realized that the idea of a spirit and the idea of a mind were different! But to answer the question at hand here...animals definitely have got what we got, be it a spirit or a mind. They are sentient just like us. We should not kill them nor should another person do that.

Absolutly animals have a soul!

How could there be character without a soul?!

All these countless acts of bravery and kindness, pure, true love (by animals)~ none of that is possible without a soul!

Besides anyone who ever spent time with any animal who was allowed to be himself will agree with me, they are extremely intelegent!   As for humans and our incredible intelentce... we destroy the only planet (home= life support) we have ! and continue to do so despite knowing the facts & the cost! In the end it will be our lives as well not just that of all other beings!

Animals are pure, good and innocent. They are and they live what religions teach us to be ... kind, forgiving,benevolent etc..  So doesn't that make them the better beings?!!!!

Never once have I doubted them having a soul!

I can't imagine how it could even be a debate. It goes’ without saying.

IYes,definately  the real purists on Earth !!!

When we tell people not to eat meat we are pointing out a major hole in a religion that [appears ???] to condone meat eating and thus they say,'Animals have no souls!'

I lived on a dairy farm for three years. i witnessed cows expressing affection and compassion for each other. hen a cow was hurt the other cows would stand around her in a group licking her fur. They never left the side of a cow that was injured or in some sort of trouble.

When a calf was taken from it's mother the mother would wail for days until her voice finally gave out,her emotional pain was so great.

I saw cows have actual friendships with each other. One day the farmer put 10 cows on the other side of the pen fence to graze the vast pasture. Even with acres and acres of grass to be had the 10 cows stood right up against the fence nuzzling the cows in the pen. They did not want to be separated.

I saw amazing animal behavior which made me realize all the more that animals do have souls. But I saw many more atrocities and cruelty towards on that farm than I ever thought existed in the dairy industry. It caused me to move away from there and stop eating dairy as well. The lives of these gentle beasts are full of physical torment,emotional suffering and ultimately untimely slaughter. I still have nightmares about it.

Yes ,they feel,they nurture,they protect ,they defend and they most definitely love. We cannot expect them to have human values and morals,that is preposterous. Animals are to be respected and appreciated for what they are,the non verbal innocents of this world. They are most absolutely precious just as they are.