The second recipe Barb sent for me to try last week was a Stifado.  Stifado dishes are stews, and they are easy to recognize: they include onions - a lot of onions. The most commonly used are whole small boiler or pearl onions, but larger onions can be used as well, and the quantity is often equal in weight to the main ingredient. 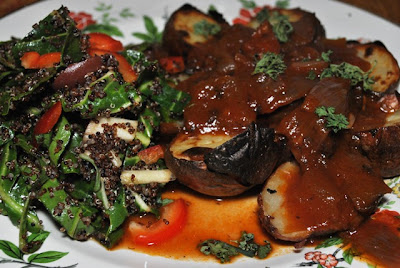 Stifado dishes can be made with meat, poultry, seafood, game, or another vegetable as the central ingredient, with onions, wine or vinegar, tomato, and a selection of spices (often including cinnamon) creating a flavorful base. Generally made on the stove-top, there are a few stifado variations that can be made in the oven. I started mine on the stove-top and simmered it on low in the crock-pot for three hours.

I don't remember having or making stifado before, but Barb loved it and sent me her mom's recipe so I thought I'd try it.  I had most of the ingredients, I think the only thing I had to purchase was the seitan and the wine.  I wanted to make it 'vegan style' and  wasn't sure what I would use for a meat substitute.  I had thought about super firm tofu, but then I saw seitan in stew meat size chunks in the cooler at the market.  The seitan worked out great.

It's a rich stew, I am usually a bit leery of Greek cuisine when we go out as I haven't liked some of the strong flavors. I enjoyed the gravy for this stew, but did think it might be a little strong for my husband's taste.  I was tasting it while cooking though and I think by itself it was a little strong. Combined with the roasted red potatoes, I was pleasantly surprised, it's a really nice dish.  I love the color and it made the house smell pretty wonderful while it was simmering too. I think I'll make this with a zucchini or summer squash and a nice vinegar instead of the wine when the vegetables are happening in the summer. 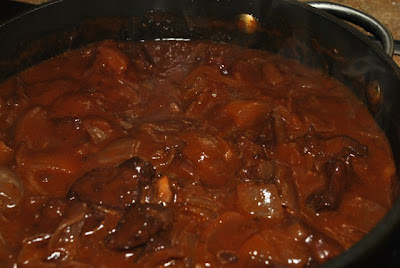 I didn't change this recipe much except to replace stew meat with seitan.  I roasted some red potatoes to pour it on and served it with a fresh green salad of:  chard, collards, kale, red bell pepper, kalamata olives, some roasted and steamed kaniwa seeds, splash of pumpkin seed oil, balsamic vinegar, lemon juice, sea salt, and fresh ground pepper.  The greens for the salad were picked fresh from my garden. Not out of the ordinary except that it is February.  It's not usually dry enough to get out to the garden, but we have had some warm dry days, it's been very refreshing.

Saute the onions in olive oil until golden brown and then add to the sauce, cover and simmer on very low heat for 2 to 3 hours until seitan and onions are tender.

During the cooking process the sauce should cover the seitan and onions.  Add more water, if necessary.  Sauce should be thick when ready. 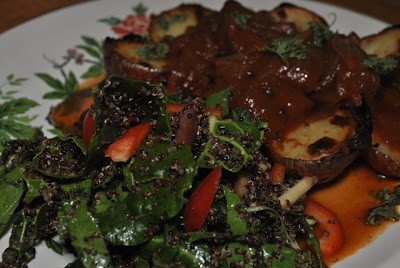